The Wyoming Highway Patrol would like to congratulate Class 99 on their recent graduation.

The class graduated with 16 Troopers and will begin working with a Field Training Officer in areas throughout the state.

Trooper Kyle A. Hawn (Badge #169) is from Wichita, KS. He is excited to a part of this great agency and to start his career in Gillette. Kyle and his wife are expecting their first child in July.  In the little free time, he'll have left; Kyle enjoys playing and watching sports, video games, and hiking.

Trooper Stuart Coxhead (Badge #67) moved here from Bozeman, Montana. He will be stationed in Saratoga, Wyoming. He enjoys hunting, fishing, and backcountry skiing.  He received his Bachelor's Degree in Political Science and a Minor in Sociology from Montana State University in 2019. He is excited to be a part of his new community.

Trooper Farrell (Badge # 185) is being stationed in Gillette, Wyoming, where he has lived with his wife and kids for the last six years. He grew up in northern Illinois before moving to Wyoming with his wife to work for the railroad. He enjoys shooting, hiking, and spending time with his kids.

Trooper Frantz (Badge #164) is being stationed in Arlington, Wyoming. He is from Oklahoma, where he had a background in Fire, EMS, and oilfield rescue and served in the Army as a reservist. He enjoys spending time outside with his dogs and looks forward to exploring the great outdoor opportunities that Wyoming has to offer.

Trooper Nicholas Curley (Badge #222) grew up in South Carolina but moved to Wyoming in 2013. He enjoys rock climbing, hunting, and backpacking with his wife and two children. Trooper Curley is stationed in Sundance, Wyoming, and he and his family look forward to exploring Devils tower and becoming active members of the community.

Trooper Logan Kelley Badge #176 is assigned to the Cheyenne area division. He is a Wyoming native and lived in Rawlins before joining the Wyoming Highway Patrol. Trooper Kelley enjoys hunting, fishing, traveling, and spending time with his family. Trooper Kelley is looking forward to interacting with the community and the rest of the Cowboy State Guardians. This agency offers an abundance of opportunities, all of which he is excited to earn.

Trooper Anthony J. Martucci (Badge #198) is originally from Northern California and has lived in Cheyenne for the last two years. Before starting with the Wyoming Highway Patrol, he was a firefighter/EMT in Cheyenne and a U.S. Army reservist. He will be stationed in Wheatland, WY.

Trooper James Keeley (Badge #122) is from Pine Bush, New York. He will be stationed in Thermopolis and looks forward to serving his community. He enjoys hunting, fishing, and the outdoors.

Trooper Caleb Pushcar (Badge #60) is from Cheyenne, Wyoming. He has spent twenty-four years of his life in Cheyenne. He graduated from Cheyenne East High School and played soccer. Trooper Pushcar enjoys the outdoors, fishing, mountain biking, skiing, and playing soccer. Trooper Pushcar will be stationed in Casper, Wyoming as a proud member of the Cowboy State Guardians.

Trooper Anthony Landers (Badge #125) moved here from Nebraska with his family. He is happily married to his wife, and they have two children. He enjoys spending time with his family, hunting, and fishing. Trooper Landers is stationed in Worland, Wyoming, and he looks forward to becoming a contributing member of his community.

Trooper Adam Reiter (Badge # 132) is from Montana, where he enlisted in the U.S. Navy and served two years in Iraq as an Aviation Ordnance man. He spent five years enlisted until he returned to Billings, Montana, to acquire his bachelor's in Criminal Justice and Sociology.  After finishing college, he moved to Cheyenne, Wyoming, to become a Veteran Affairs Police Officer before becoming a Wyoming State Trooper. As a Trooper for Wyoming Highway Patrol, he will be stationed in Casper, Wyoming. While in Casper, Trooper Reiter takes pride in taking care of my family and spending their time together hunting and fishing west of Casper. Outside of spending time with family, Trooper Reiter enjoys restoring his 78 Ford Bronco and practicing Brazilian Jiu-Jitsu.

Trooper Tyler Schilling (Badge #186) is from Brownsville, Oregon, and will be stationed in Pinedale, Wyoming. He enjoys hunting, fishing, and riding motorcycles. Schilling wrestled for California Polytechnic State University (Cal Poly) and competed in the PAC-12 Conference during his college tenure. He graduated from Cal Poly in June 2020 with a Bachelor's Degree in Sociology-Criminal Justice. Schilling is excited to begin his career in Pinedale, Wyoming.

Trooper Willette (Badge # 147) lives in Star Valley, Wyoming. He is a submarine veteran from Cathlamet, Washington. He will be stationed in Jackson. He enjoys hunting, fishing, and spending time with his family.

Trooper Ryan Wille (Badge #221) grew up in Baggs, Wyoming, and graduated from Little Snake River Valley School. Trooper Wille moved to Idaho for college, where he married his wife Jesse, and they have an 18-month-old girl named Parker.  Trooper Wille will be stationed in Rock Springs and is excited to go to work.

The Academic Award is based on the highest overall test percentage of written tests with the fewest retests.  The Academic Award for Class 99 went to Recruit Ryan Wille, with an overall average test score of 99.47%. In a very close second place was Recruit Austin Willette with 99.37%. The academic class average score for Class 99 was 95.55%.

Overall Fitness Award is based on the WYPAT fastest time on the final WYPAT test. Applicants at WHP testing have 6 minutes and 17 seconds to pass the WYPAT test to be hired successfully. The Overall Fitness Award for Class 99 went to Recruit Tyler Schilling, with a final WYPAT time of 3 minutes 5 seconds.  The overall Class 99 WYPAT average time was 4 minutes and 6 seconds.

The "Esperit de Corps" Award is based on the Cadet who consistently demonstrated a spirit of comradeship, enthusiasm, and devotion to a cause higher than himself throughout the Wyoming State Trooper Academy. The award goes to Recruit Tyler Schilling.

Please join us in congratulating these new State Troopers. 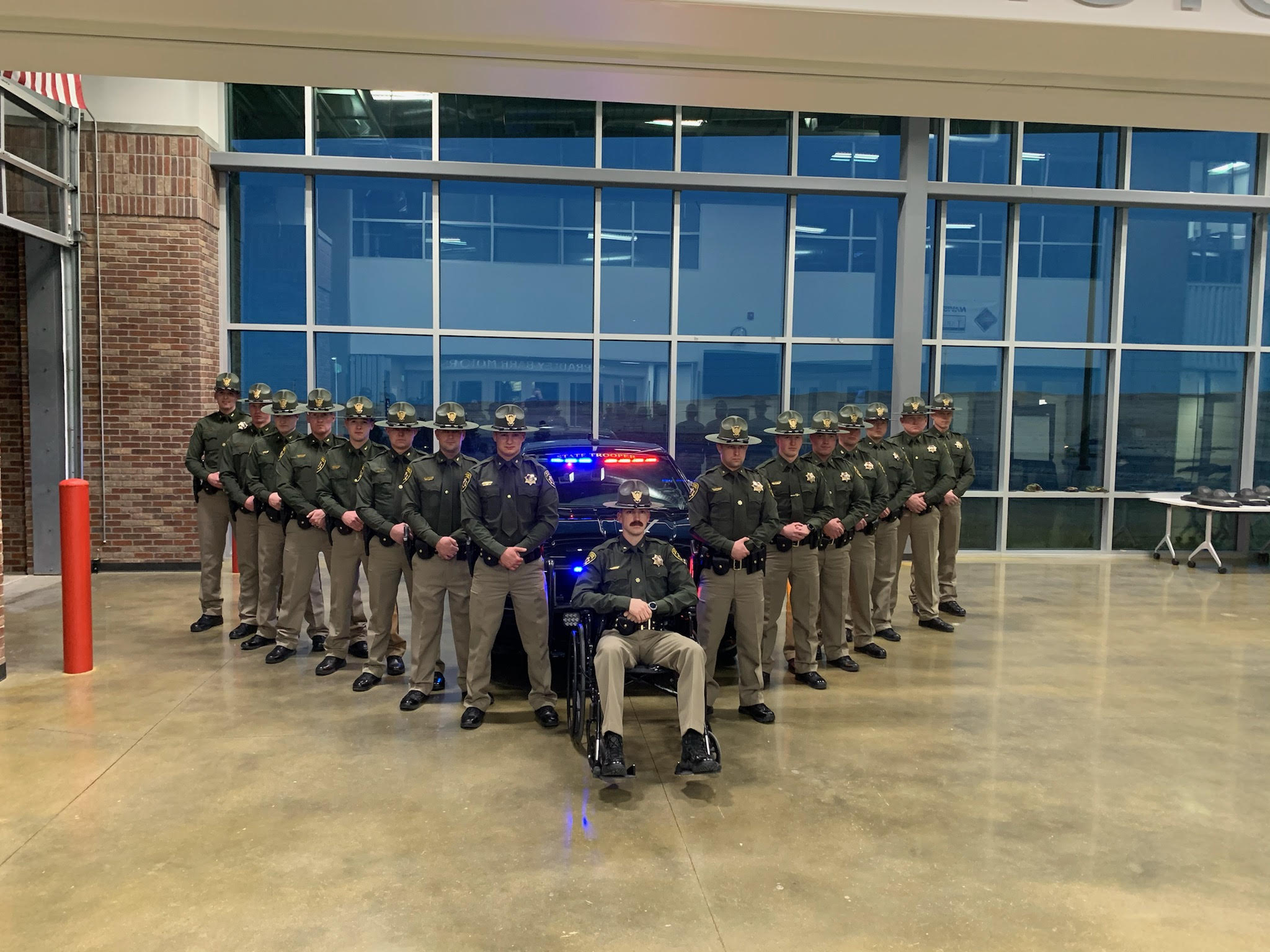